This article was originally published on The Huffington Post by Mary Papenfuss on Dec. 27, 2016

Chicago continued its horrifying parade of violence over the Christmas holiday with 57 shootings and at least 12 dead.

Several surviving victims were seriously or critically injured and battling for their lives, the Chicago Tribune reported.

The gun violence from Friday to Monday evening surpassed the steep shooting tally over the holiday last year, when 30 people were shot and six died.

Seven people were shot in a single incident on Sunday after a man emerged from an alley and opened fire on a family party at a home in the city’s crime-wracked East Chatham neighborhood, CBS Chicago reported. When the shooting finally stopped, James Gill, 18, lay dead with a bullet to the head. His 21-year-old brother, Roy Gill, died later at a local hospital. The shooter escaped.

One 40-year-old man was cut down by multiple bullets outside the Apostolic Labor of Love Church; he later died at the hospital. 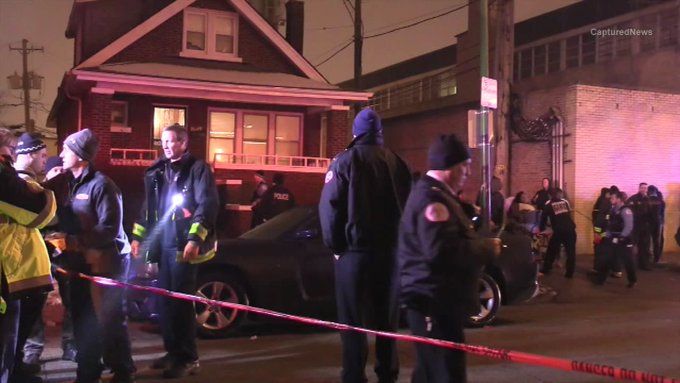 The bloody holiday weekend began Friday night with five teenagers shot within feet of each other in the city’s South Austin neighborhood. All survived.

“We have a traumatized city,” said Susan Johnson who runs Chicago Survivors, a group that counsels the families of murder victims. She told NPR that people were living “hair-trigger” lives with anger issues “as a result of living in trauma and in violence.”

Chicago Police Superintendent Eddie Johnson called the toll a “reprehensible number of shootings and murders.” If “anyone thinks this is okay or it’s normal, then you’re wrong, because it’s not okay and it’s not normal,” he said at a press conference Monday.

Police attributed most of the violence to gang warfare.

“These were deliberate and planned shootings by one gang against another,” Johnson said, per CNN. “They were targeted knowing fully well that individuals would be at the homes of family and friends celebrating the holidays. This was followed by several acts of retaliation.”

Ninety percent of those killed had gang affiliation and criminal histories, law enforcement authorities said. They were “pre-identified by the department’s strategic subject algorithm as being a potential suspect or victim of gun violence,” police spokesman Anthony Guglielmi told the Tribune.

The number of homicides in the city so far this year has hit 768, compared with 492 at the same time last year. It’s the first time since 1997 that there have been more than 700 gun violence homicides, the Chicago Tribune noted.